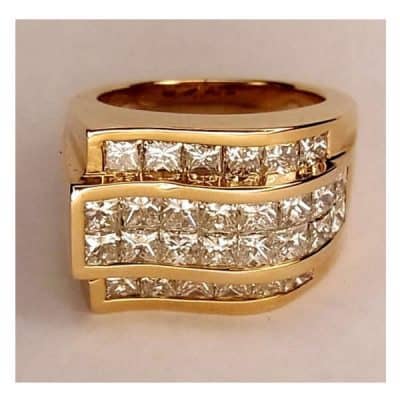 Add to Wishlist
Category: RINGS
Send to a friend.

Spectacular cocktail ring in 14k rose-gold set with between six and seven carats of Princess-cut diamonds, in four invisibly-set rows. Invisible setting was invented by Van Cleef and Arpels in the 1930s and involved hand-cutting grooves into adjoining stones, breaking many stones in the process, so that they linked into each other without any metal between. It was incredibly expensive at the time. Now the grooving is done with lasers, as diamonds are too difficult to cut in the traditional way, but it is still an extremely tricky technique. The ring is in the Retro or 1940s style, and although the technique was in existence by this time it was only used by the top French jewellers. This ring probably dates from the 1970s/80s and may be American or even South American. Wherever it’s from, it is amazing. A large finger size- UK size S: US size 9 could be worn by either sex.

Be the first to review “AMAZING COCKTAIL RING” Cancel reply
X
Brought to you by WisdmLabs: Expert WooCommerce Developer