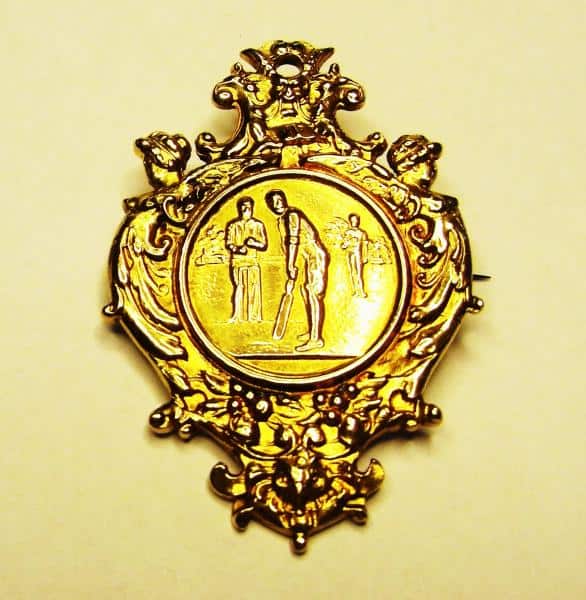 Add to Wishlist
Category: FOR MEN
Send to a friend.

This was originally a watch fob, to which at some time has been added a pin and catch to wear as a lapel pin or brooch. It is in 9ct gold, made in Birmingham in 1911, with the unidentified maker’s mark RP, and a design registry number – to prevent copying the design. It was presented in 1912 to John Cole by the Netherton Cricket Club for his 30 year service as Honorary Secretary. The front bears a scene of a batsman at the crease, ready to take a ball, with the wicket-keeper and a fielder, in a remarkably elaborate Renaissance Revival cartouche, with caryatids and scrolls, and a mask just below where the suspension ring would have been. The medallion is 1 5/8 x 1 3/8 inches: 49 x 34 mm, and weighs 13.5 grams overall

Be the first to review “CRICKET ‘LONG SERVICE’ MEDALLION” Cancel reply
Brought to you by WisdmLabs: Expert WooCommerce Developer