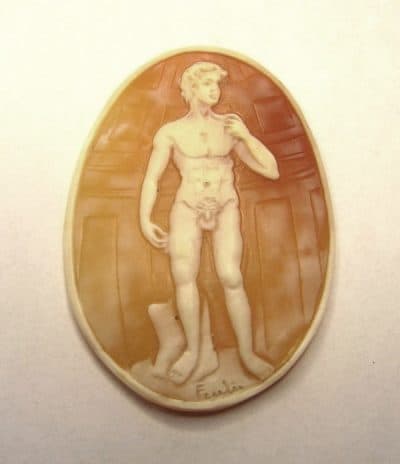 Michaelangelo’s 15 foot high statue of David is one of the world s most famous sculptures, and has inspired many works of art, as it has this finely carved shell cameo. There is even a copy in Copenhagen. I have been able to contact the workshop in Torre del Greco, near naples, where ithe cameo was carved. The cameo is signed on the front FRULIO and on the back a script monogram GS. The engraver was Tammaro Frulio, in the 1970s, and the monogram on the back is that of the grandfather of the present proprietor, Gaetano Scognamiglio, who used to sign the backs of the cameos before handing them over to the individual carvers. The cameo is quite large – 2 3/8 inches: 60 mm in height, and is unmounted. It could be made into a brooch or pendant by the additon of a pin or pendant loop (or both) at some extra cost. Alternatively, it could be framed – like the little work of art it is.

Be the first to review “DAVID SHELL CAMEO” Cancel reply