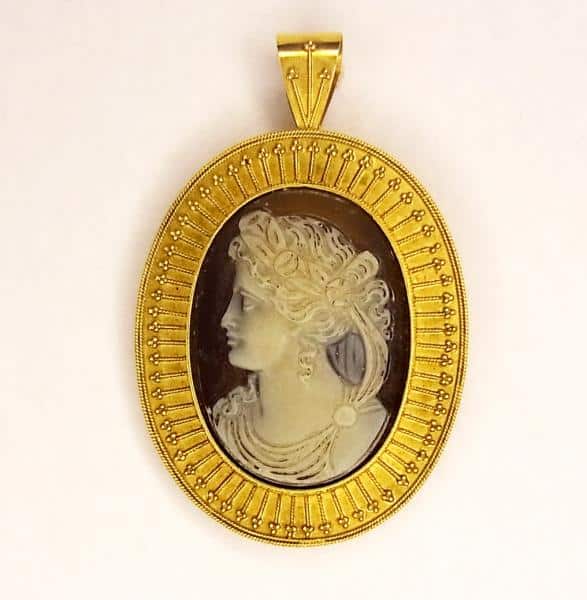 Add to Wishlist
Category: NECKLACES & PENDANTS
Send to a friend.

An attractive late 19th century hardstone cameo of a girl’s head with an elaborate hair-style and fabric-draped shoulders. The setting is in the Etruscan revival style popular from the middle of the 19th century after the discovery of jewellery in early Etruscan tombs. It can be worn either as a pendant or a brooch – the pendant loop folds down behind the piece as a brooch. The pin is stamped 15ct, so it is English, as this standard was mostly used in UK, as is ‘ct’ instead of ‘kt’ used in America and elsewhere. Without the pendant loop, it measures 1 3/4 x 1 3/8 inches: 45 x 35 mm.

Be the first to review “HARDSTONE CAMEO IN ‘ETRUSCAN’ MOUNT” Cancel reply
Brought to you by WisdmLabs: Expert WooCommerce Developer