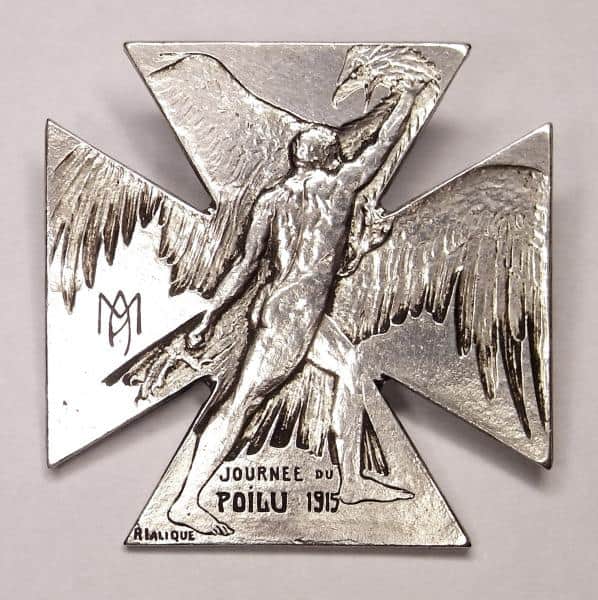 The famous French art nouveau jeweller Renée Lalique produced this silver military cross in celebration of the ‘poilu’ – French slang for the unshaven, unwashed, dirty, raggedy foot soldier in the trenches of the Great War. It is stamped with a naked man grasping an eagle by the neck, and below ‘JOURNEE DU POILU 1915’ and signed R LALIQUE. The back is absolutely plain, apart from a brooch fitting. The ‘journée du poilu’ (day of the soldier) refers to Christmas Day when he might get a few days precious leave to spend with his wife or girl friend-as in the attached illustration. Produced in the second year of the war, the muscular naked man represents an idealised soldier, somewhat optimistically shown strangling a wing-outstretched eagle representing Germany, in fact only achieved with much bloodshed on both sides and the help of the Allies, mainly the British, in November 1918. I do not know how many of these were made, but it is only the second one I have seen, the first being an even rarer gold one which we had in the 1970s. 1 3/8 inches: 35mm across the arms, certainly this is a most unusual item by this noted French jeweller