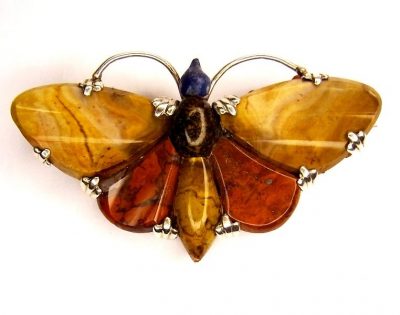 So-called ‘pebble’ jewellery became extremely fashionable in Scotland from around the mid-19th century. Made from differenct coloured agates, or natural stone ‘pebbles’ found in Scotland, it is common to see Clan brooches and bracelets, but a butterfly is very unusual. Although some were set in gold, the vast majority of pebble jewellery is set in silver, as is this one, It is composed of tan and rust coloured agates, with a darker agate body. The head is cheating a little, because as far as I know, lapis-lazuli is not found in Scotland, but it makes a pleasing contrast to the earthy colours of the remainder. The brooch is 2 5/8 inches:68 mm across, and has a gold pin.

Be the first to review “SCOTTISH BUTTERFLY BROOCH” Cancel reply