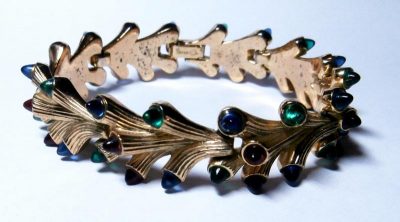 Add to Wishlist
Category: BRACELETS & BANGLES
Send to a friend.

A fine quality costume jewellery gilt and Swarowski cabochon bracelet by the well-known and collectable company TRIFARI dating from the 1970s, and in excellent condition, although having lost one cabochon near the clasp. All ‘gems’ used by Trifari came from Swarowski. Trifari was founded in New York in 1925 by Gustavo Trifari, with Leo Krussman and Carl Fishel. In 1930 Trifari employed Alfred Philippe, who had previoulsy worked as designer for Cartier and Van Cleef and Arpels, but with the 1929 crash, these were struggling. Philippe stayed with Trifari until 1966 andw as responsible for many of their designs.

Be the first to review “TRIFARI ‘COSTUME’ BRACELET” Cancel reply
X
Brought to you by WisdmLabs: Expert WooCommerce Developer