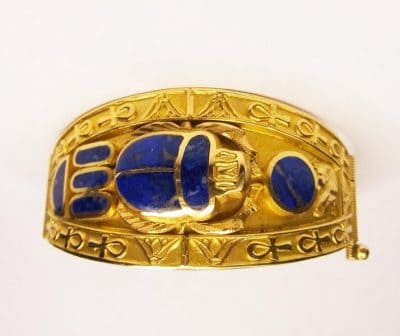 N477A This splendid Egyptian Revival bangle was probably made late 19th century, following the opening of the Suez Canal in 1869 for which Verdi wrote Aida, and which inspired Egyptiana of all sorts. The first such event was Nelson’s victory over the French at the battle of the Nile in 1805, although Napoleon’s aides were the first to investigate ancient Egyptian artefacts and archaeology including the Rosetta stone in 1799 from whose three different scripts with the same meanings it was ultimately possible to read and understand hieroglyphics; and of course the discovery of Tutankhamen’s tomb in 1923 saw another wave of Deco-related Egyptiana.
This bangle is encrusted with lapis lazuli symbols and hieroglyphics, and tests as 18k, weighing 41.33 grs.

Add to Wishlist
Category: BRACELETS & BANGLES
Send to a friend.

Be the first to review “Egyptian Revival Bangle N477A” Cancel reply
Brought to you by WisdmLabs: Expert WooCommerce Developer